It’s already been 6 editions that the show has been taken place in Lyon – at Eurexpo -. Since the 19th century, the city is known as an important industrial town. The South of the city hosts several petrochemical industries along the Rhône.

For this 6th edition, event organizers, INFOPRO Digital and Idice, announced 300 exhibitors and brands. The exact number of visitors has not yet been released, but we can already share a few highlights of the show.

A slow start but real exchanges

Visitors required time to find who was who in this broad spectrum of exhibitors. Attendees or potential leads were attentive to the gospel given by international speakers such as Richard d’Aveni, author of “The Pan-Industrial Revolution” and Professor at Tuck Business School Dartmouth, Dr. Cora Lüders-theuerkauf from Medical Goes Additive or local speakers such as Jean Michel Lucas from Cylaos, Alexandre Brosseau from Kreos or EOS André Surel.

Speaking of FDM technology, one of the exhibitors was pleasantly surprised by the maturity of the market. Last year, the main question raised by visitors was “what is FDM 3D Printing?” whereas this year, professionals were wondering how to integrate it into their activities?”.

France, a competitive market for distributors

The quality of exhibitors demonstrated a strong influence of distributors. 45 out of 300 exhibitors were distributors of 3D Printing systems and materials. This number is continuously increasing since distributors enable international manufacturers or companies to avoid linguistic and/or cultural barriers.

French manufacturers that stand out from the crowd

A wide range of innovations was showcased at 3D Print Congress & Exhibition: 3D Ceram, the specialist in ceramic 3D printing, showcased a new SLA 3D printer. With a printing surface of 96.8 x 96.8 x 150 mm, the printer produces ceramic parts in successive layers using a laser that cures a paste composed of photosensitive resin and ceramic.

REPMO launched a post-processing machine for metal 3D Printing, called DLyte. The company aims to minimize human intervention with its patented process machine, a machine that provides a mirror polish on any type of geometry.

X3D Group is initially a distributor that has launched its own brand of x3D-Systems 3D printers. The company’s new line includes Shape1 which integrates LCD technologies, SLA 3D printers called RapidX and SystemX and Metalform that produces metal 3D Printed parts. For now, X3D Group will only focus its development on the French market.

As far 3D printers for makers and professionals as concerned, it is hard to not mention the Strateo 3D 3D printer from Emotion Tech. With a “Print Shield 3D” technology, the 3D Printer meets the needs of prototyping. Volumic, on its side highlights the Stream 30 Ultra, which can print materials such as PEEK, PEKK or ULTEM. According to the manufacturer, the 3D Printer would print twice as fast as the Stream Pro.

These product lines provide antibacterial, antifungal, conductive and optical effects properties that may be of interest to users of 3D printing technologies.

The ease of use of AM software platforms

Software publishers increasingly update their software platform to make it easier for beginners and savvy professionals to use their software. A blatant example of such improvement is the demonstration of the Geomagic Freeform software by Pierre Maréchal, Regional Sales Manager at 3D Systems.

Updated for the last time last year, we discovered a software that makes design more accessible and ensures “consistent” results. Designed for the medical, jewellery and art sectors, Geomagic Freeform makes it possible to create organic forms ready for production. The software does not necessarily require any CAD expertise, it is intended for sculpted engineering design and combines 3D scanning, modeling or surfacing tools.

The number of creators and makers that are willing to develop a business in 3D printing or simply to use the technology on a daily basis keeps growing. Prusa is one of the manufacturers that makes us believe in a future where every teenager will have a 3D Printer.

Two months after the launch of their 3D models marketplace and the “World Map” to engage users of his 3D printers, Prusa is certainly the manufacturer that creates the best “user experience” and that has the largest community of makers on the market. Josef Taborsky and Jakub Kucera, two 3D Printing technicians and sales from the company,  told us that the platform already registers 98,178 locations where Prusa 3D printers are found around the world and already has 14,807 users, capable of providing “Print-on-demand service”, “technical support” or simply introducing the “Prusa 3D printers” to potential prospects.

The most prominent announcements of a trade show dedicated to additive manufacturing usually focus on materials, 3D printers, and software. However, there are other related industries that are also important for the development of the AM market.

3D Print Lyon has been able to highlight companies of these industries: Schmelzmetall, which manufactures copper alloys and commercializes metallic powders,  Actemium for instance supplies equipment for processing metallic powders, Nabertherm and its furnaces for heat treatment of metal parts, SINEX/Chauvin delivers screening machines for cleaning powders, and STRUERS SAS, provides the AM industry with equipment for analyzing the quality of materials.

Several exchanges with exhibitors revealed that metal additive manufacturing is still at its early stage on the French market. The technology is still considered as very expensive but its potential is already acknowledged. How can we overcome this? This is a topic that we need to address.

Lastly, post-processing is another issue that increasingly raises interest. Indeed, AM might be efficient but does not constitute the final step of a manufacturing process.

You can now post free of charge job opportunities in the AM Industry on 3D ADEPT Media. Featured image: Mimaki 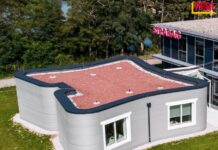 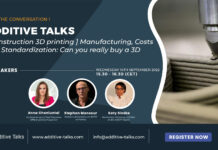 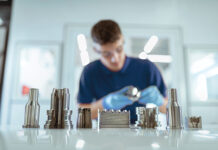