An attempt to understand the world of stock markets that additive manufacturing companies are entering.

Even though the Covid-19 pandemic has expedited the use of AM across various manufacturing fields, it should be noted that beyond these industries, there are financial markets that are often vitally linked to economic performance. Indeed, the influence of financial development on economic growth is one of the most challenging research questions that macroeconomists and financial economists had and still have to discuss. Yet the reality of our industry reveals that the number of AM companies going public via mergers with Special Purpose Acquisition Companies (SPACs) rather than conventional Initial Public Offerings (IPOs) is increasingly growing.

On the heels of Desktop Metal, other AM companies follow the “SPAC” merger route to access the stock market. The first observation, one can all make, is that, beyond the SPAC IPO trend, such mechanisms happen to be a funding opportunity for AM companies that are going down these routes.

However, apart from the SPAC-IPO trend, one should give kudos to those AM companies that went public without any fusion with a third-party company.

But what is a SPAC and how does it work?

“Generally, a SPAC is formed by an experienced management team or a sponsor with nominal invested capital, typically translating into a ~20% interest in the SPAC (commonly known as founder shares). The remaining ~80% interest is held by public shareholders through “units” offered in an IPO of the SPAC’s shares. Each unit consists of a share of common stock and a fraction of a warrant (e.g., ½ or ⅓ of a warrant)”, a PwC report reads.

This means that those companies have no operations or business plan other than to acquire a private company using the money raised through an IPO, thereby enabling the latter to go public quickly.

As far as shares are concerned, it should be noted that founder shares and public shares present similar voting rights. However, founder shares have the exclusive right to elect SPAC directors. Warrant holders generally do not have voting rights and only whole warrants are exercisable.

Furthermore, as mentioned earlier, private companies that are going down the SPAC merger route often benefit from a funding opportunity.

Helen Boyle & William Samengo-Turner, senior associates at law firm Allen & Overy LLP explain: “SPACs offer young and fast-growing tech businesses seeking a listing an alternative to the traditional IPO. Many will not have the credentials of a traditional IPO candidate, possibly being unable to deliver the kind of long-term financial and operating track record traditionally expected of a successful IPO. They may be in the very early stages of development, looking for ways to finance the research and development programmes that their future success depends on, and are certainly likely to be pre-profit and in some cases pre-revenue (unusual on a traditional IPO)”.

Why do AM companies prefer SPACs mergers over IPO?

According to financial experts, tech companies are currently the preferred target for most SPACs. Interestingly, one could say the attraction goes both ways as high growth AM technology companies are also looking for a way to go public.

Another way to explain this attraction can be the fact that AM being from the very beginning a disruptive technology, founders and executives who are at the heart of such companies are likely to be attracted by unusual yet disruptive mechanisms like SPAC mergers, to go public.

Just like conventional manufacturing processes are described as time-consuming and expensive in certain cases, AM companies might see in SPACs mechanisms a rapid and cost-saving process.

Experts from PwC explain that a SPAC lifecycle can occur on a 24-month timeline to complete a merger.

Once a target company is identified and a merger is announced, the SPAC’s public shareholders may alternatively vote against the transaction and elect to redeem their shares. If the SPAC requires additional funds to complete a merger, the SPAC may issue debt or issue additional shares, such as a private investment in public equity (PIPE) deal”, they point out. For this reason, “under the rules governing them [see the table below], SPACs must identify firms they can merge with within 24 months after they have raised their funds or they will be wound up and the IPO proceeds returned to investors”, Ivana Naumovska, lecturer at INSEAD, a business school with campuses in France, Abu Dhabi and Singapore notes.

While the advantages seem very appealing for private companies, it should be noted that such process also raises its share of disadvantages. The table below features a list of pros and cons that companies should be aware of – a list of items that has been established in comparison with IPO’s advantages and disadvantages:

We are just halfway through the year…be cautious.

We are just halfway through the year and 2021 has already seen some massive valuations of newly public companies, companies that do not only operate in the AM arena. No matter what route (SPAC or IPO) they take, the primary advantage to go public for AM companies is the potential to grow their company exponentially with much-needed cash.

While we cheer with AM companies that have embraced this route, we can’t help but fear an “IPO crisis”. Far be it from us to be birds of ill omen but the fact is, there was a time when interest in technologies has spiked and fallen during the mid-2010s.

When asked if this might happen with AM technologies, Arno Held, Managing Partner at AM Ventures Management GmbH, did not and could not provide a definite response, yet remains encouraging:

“Our planet and our society are faced with massive challenges. If we want to make the transition to a sustainable civilization, we must adapt our ecologic and economic behavior. Changing our consumption means that products must change which means that production must change. We must avoid waste, increase the lifespan of products and reduce the distances that products have to travel as physical goods. All these challenges are addressed by digital manufacturing in general and Additive Manufacturing technologies very specifically.

On AM Ventures’ tech radar which identified more than 600 AM startups in 2021 alone, we can see that half of the AM companies founded this year are applications companies. This is an entirely new trend since we have started monitoring startup activities more than 7 years ago and means that we have finally learned how to use AM technologies and apply it in order to revolutionize how products are developed, produced and distributed.

Of course, markets are performing in cycles which are sometimes bearish and sometimes bullish. The overall trend, though is very encouraging and we are only just at the beginning of the digital manufacturing age”.

Furthermore, another key point we will keep in mind is that, although these publicly-listed companies benefit from “enough” cash to fund operations and ensure their future growth, one cannot legitimately say that SPAC acquisitions guarantee profitability or the success of a company.

As per the words of Held, “profitability and success are never granted in business. They are much rather the result of extremely hard work in the right market, at the right point in time, with a sound business model and done by the right team of individuals. Still, all these factors can only increase the likelihood for success but will never give a 100% guarantee.”

Moving forward, AM just starts to be the talk of the markets. This newfound interest will not fade anytime soon. So, if you are a publicly-listed company, do not lose track of your vision and use the cash wisely, if you are not a publicly-listed company, take advantage of the media hype it continuously provides to AM technology in general, and make your best deal out of it. In any case, the progression from early-prototyping applications to end-use (mass) production becomes more and more tangible.

This exclusive feature has first been published in the 2021 July/August issue of 3D ADEPT Mag. Remember, you can post job opportunities in the AM Industry on 3D ADEPT Media free of charge or look for a job via our job board. Make sure to follow us on our social networks and subscribe to our weekly newsletter : Facebook, Twitter, LinkedIn & Instagram ! If you want to be featured in the next issue of our digital magazine or if you hear a story that needs to be heard, make sure you send it to contact@3dadept.com 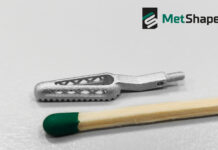 How MetShape uses indirect AM process LMM for Medical 3D printing and more.